While working at LakeView NeuroRehab I met another young lady that changed my life. Sue D. was a quadriplegic, paralyzed from the neck down. She had a little movement in her right wrist that helped her move her motorized wheelchair from one place to another…or should I say raced from one place to another. Sudy was an ornery sort and mad at God for her accident. I always thought she should have been mad at the drunk boyfriend that hit a pole going 50mph on his motorcycle…but nooooooooooooo, she was mad at God. Sudy (I called her that) didn’t have a brain injury but lived in the rehab, none the less, because there was no other place to put her. Sudy never came to any of my art classes because her hands “didn’t work” and she hated art. I didn’t let that bad attitude stop me and would go to her room after my shift was over to try to get her to make something creative. I knew that art had a power to heal and I was compelled to change her mind.

Sudy was cranky and not nice to be around. But God had laid her on my heart, and I wasn’t going to give up on her. I walked into her room one evening and said “Let’s make some art.” She swore and said “What part of paralyzed don’t you understand !!!?*??*!??”
This time I didn’t leave.
I sat down and started a conversation. Exasperated, I said
“What do you want to be when you grow up?” (she was 35 going on 12)
I thought she would be mad at the question, but instead, her tone warmed and said, “Before this happened to me, I wanted to be a photographer.”
That was all I needed to know. Photography is art. I went home and explained the situation to David. He made a tripod to attach to her wheelchair. We secured a camera on the horizontal platform that had a chord attached with a bulb on the end.  She could look through the lens and press down on the bulb with only a little movement in her wrist… and Bingo, she could take pictures.
I was excited to bring the contraption to work and see what Sudy thought. I could tell she was excited and skeptical at the same time.
Her first assignment was to go outside and take pictures of clouds. Easy.
The rehab was on a hill and wherever she maneuvered her wheel chair she could see the sky. I went with her the first few times but she quickly got the hang of it and was outside every day taking pictures.
Soon I took all the film to be developed and when the pictures came back I laid them all out on a large table. She was amazed at what she had done. I could see her pride well up in her eyes, in her spirit.
“I can’t believe I took these wonderful pictures.”
She had become interested in one photo in particular.
“Look at the 3rd picture over and the 4th one down. Doesn’t that look like an Angel?” I noticed it right away.
“Yes, it definitely does.” I continued “What exactly are Angels?”
Sudy looked at me as if she was a cornered animal. “They’re messengers from God, everyone knows that.” Her grouchy attitude was back.
“Well, if they are messengers from God, what is God trying to tell you?” 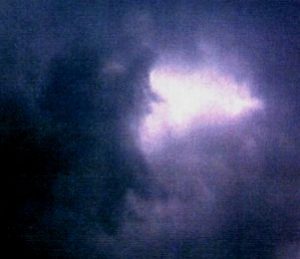 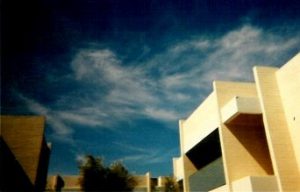 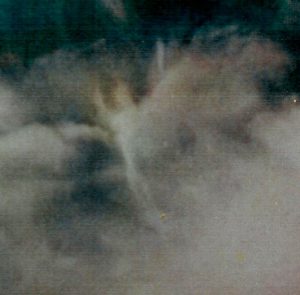 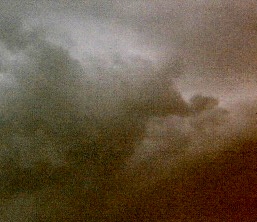 Sudy kept taking photographs day after day, week after week and finding even more Angels in her pictures. She was excited yet hesitant at first to show anyone else but soon other people started to notice. “That looks like an Angel in the clouds. I’ve never seen such a clear picture. Did you take it?” Finally one day Sudy came to me and said “I don’t think it’s a coincidence anymore. I think God really is sending me Angels and trying to tell me something.”
“What is He telling you?”
“He’s trying to tell me that I’m NOT useless. That I AM worth something, and that I can still have a life”
Thank you God.
Sudy’s attitude changed and she became a more positive person. She became enthusiastic and started to make more friends. We decided to collect the Angel pictures and write a book inspired by her personal story, called ‘Sudy’s Triumph’.  She truly had turned her life around and I was proud of her accomplishment. 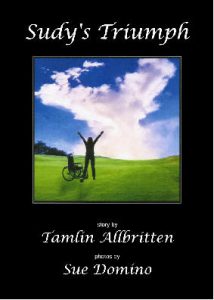 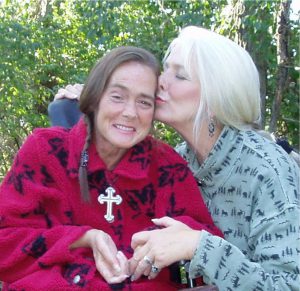 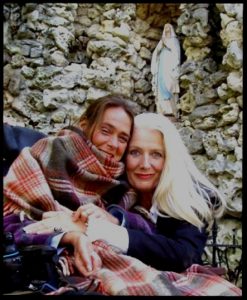 (Fast forward in the story)

It was Christmas day 1997. I was packed and ready to drive cross country to my new job in Arizona. I wanted to say one last good bye to Sudy before I left. We had become very close over the last year and a half, while writing our book, and she was still taking amazing picture of Angels in clouds.

I had promised her that I would finish Sudy’s Triumph once I settled in Arizona.
I drove to the rehab center and prepared myself for a somber farewell. Sudy met me at the front door in her wheelchair and was happier than I expected. I thought she would be as sad as I was, because I was leaving, but she was ecstatic.
“Follow me. You won’t believe what I have in my room.”
I followed her to her room and I was astounded at what she showed me. On her full length window of the door leading outside was a life-size frost Angel. The detail was immaculate. We could see the feathers on the wings, the glowing halo, and the long flowing gown. It was as though her Angel’s image had been etched on the glass while she walked out the door. Sudy took a picture as we stood there looking at the amazing frost angel. We didn’t know at the time but it would end up being the last image, on the last page, of our book. 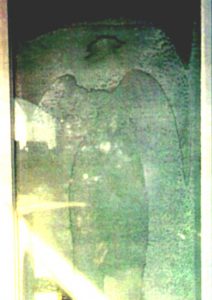 It was no coincidence. The angel could have appeared on any another patient’s door and gone unnoticed, or on another day altogether and I wouldn’t have seen it at all. But on Christmas day, it was no coincidence. Sudy understood that her life had been forever changed.
So had mine.

PS. For more pictures of Sudy’s angels go to My Books on this website and check out Sudy’s Triumph.