What will YOUR epitaph be?

Have you ever thought what YOUR head-stone would say?

This is an interesting topic that I discussed with my clients/art students/patients in rehabilitation centers. Because most were suffering with addictions, this art lesson brought up poignant questions:

1.) WHO will write what’s on your head-stone?

In other words:
“What LEGACY  will YOU leave behind when YOU die?”

OK, I know this is a bit CREEPY, but HALLOWEEN is close and I want you to see how my rehab art students experienced this effective & touching art lesson.

Most of you know that I wrote my Memoir a few years ago.
This story and many others can be found in my book. 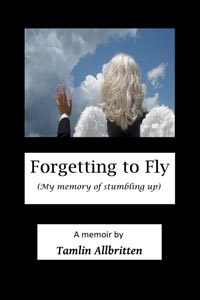 I stood in front of class, twenty-five patients with addictions, at  A Sober Way Home, in Prescott, Arizona, where I’ve been working for over a year. This was my last art lesson with them and I wanted it to be memorable. I hadn’t told the students that I was leaving yet. I couldn’t gather the nerve. Perhaps I would later but for now I would remain strong.

This art class is made up of gang members, several society drop outs, housewives, kids, retirees, head’s of corporations, an Olympic champion, cheer leaders, construction workers,  a cowboy and two teachers, all with the same common denominator… addiction.

They know by now that I’m here to give them an art assignment that will open their eyes to a healing concept, a tool for them to discover a stifled feeling, or a skill to strengthen their image of themselves. We have done this before. They all seemed to enjoy my classes, even though it usually brought up hidden, scary emotions. It was my hope that they would remember the lessons that art has taught them.

We have already made plaster masks, (the face of their addiction); 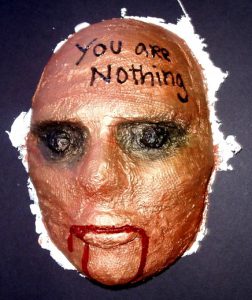 Inside/outside boxes, (Out=how they present themselves to the world, and In=how they really feel); 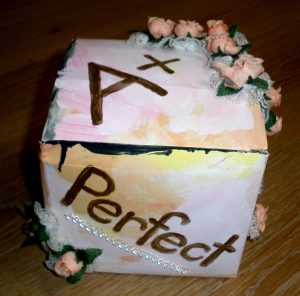 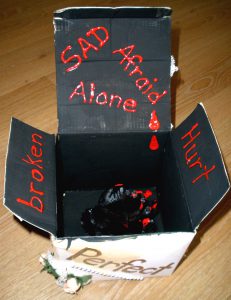 Thief collage (what their addiction has stolen from them); 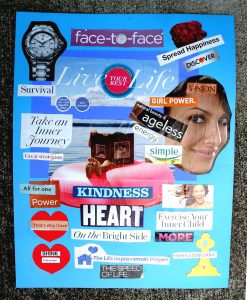 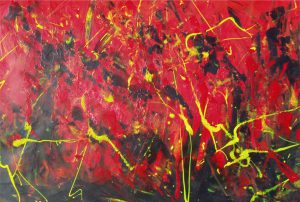 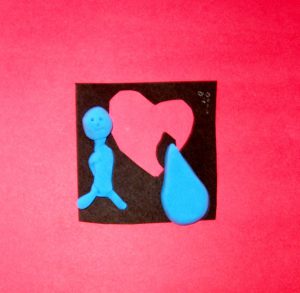 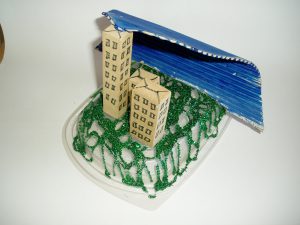 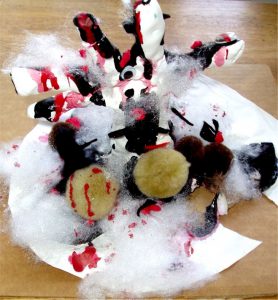 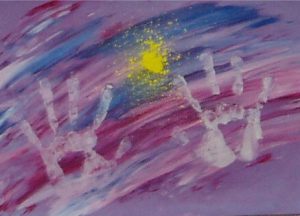 Normally, when I teach an art lesson I remind the students that it’s OK to have a starting idea, but let their art work go where it needs to go. If they visualize the final piece in their mind, then try to reach that destination, it will only stifle the journey. It will never end up like they had intended and frustration smothers the purpose. Instead of clinging to the end product, let the process be the teacher.

With all that said, today’s lesson is different.
It’s Halloween and I want to run with the essence of the holiday so I have come up with yet another way to make them think. I have placed in front of the classroom a large box filled with heavy, black dirt that signifies a graveyard. They are each given black markers and a small, wooden plaque that will be their headstone over their own grave when they die.

“Write a brief inscription of how you will be remembered by the people who love you.”
I’m asking for each of them to think about the end product of their life.
Silence.
A young man, maybe twenty or so, raises his hand.
“Does that mean if I died today, or later in my life?”
I answer “Would there be a difference?”
“A BIG difference.”
“Why?”
“Because now I haven’t become all I can be, yet.”
“What do you want to be?”
He thinks for a while then says, “I want to be a good husband, a good dad, a good son… just a good person.”
“Why aren’t you now?”
Silence again. He gets it. They all get it.

It was an intriguing question, so, spur-of-the-moment, I hand out another wooden plaque to all the students.
“Let’s make two headstones.” I add “One epitaph for now, and one for later, when you have a chance to become who you want to be.”
I let them work for a while and it’s very quiet. They are all really thinking seriously about what their legacy will be.
I thought about it for myself. What would I write? I make a tombstone for myself.

As the class finishes working on their assignment we begin sharing what they have written:
“A failure to all, including herself” then “A loving mom who cared deeply”
“A lazy, jerk-off who ruined his chances” then “ A musician who inspired all”
“ A nobody who hated himself” then “ A nobody who was OK with himself”

As we continued to share the class understood what I was trying to do. They all had a choice as to what they could do with their lives and how they would be remembered by those who loved them.
It was a powerful lesson.
They placed their headstones in the dirt with their last inscription facing out. I told them to throw away the first headstone, but some wanted to save them to remember how they didn’t want to be remembered. 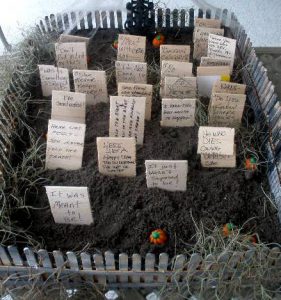 The class was over.
They hugged and thanked me for the insightful lesson as they left the room. I decided not to tell them I was moving away from Arizona and this would be the last time I saw them.
I didn’t want our time together to be about me.
I knew I would cry and change their focus.
They were thinking deeply about their legacy and I wanted that thought to sink in.
When all my precious students had left, and the art room was quiet,
I added my tombstone to the grave yard…

“She flew. She stumbled. She flew again.”

PS. What will YOUR epitaph be?

You CAN change your past

You CAN change your past