Hello, my friends,
It’s that time of year again and I never fail to remember this powerful Halloween art class, from the year 2008.
You can find the entire remembering in my memoir http://ForgettingtoFly.com  (chapter 29, page 245),
or go to https://artwithapurposebooks.com to see all the books I’ve written on the Power of ART.

This is part of my 2008 Halloween recolection:

“I stood in front of my class, twenty-two patients/clients/students with addictions, at A Sober Way Home, in Prescott, Arizona, where I’ve been working for over a year now. I love my job. I see the light go on in my students minds when they do my art assignments. They get what I’m trying to do…

VISUALIZE a better future for themselves.

It’s Halloween and I want to run with the essence of the holiday, so I have come up with yet another way to make my students think. I have placed, in front of the classroom, a large box, filled with heavy brown dirt, which symbolizes a graveyard. Each student is given black markers and a small, wooden plaque that will be the headstone over their own grave when they die. 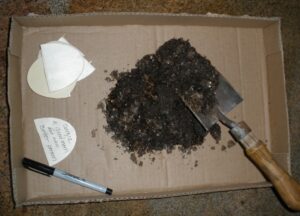 The Directive is: “What will YOUR epitaph be?”

“Write a brief inscription of how you will be remembered by the people who love you.”
I’m asking for each of them to think about the end state of their earthly life.
Silence.
A young man, maybe sixteen or so, slowly raises his hand. “Does that mean if I died today, or later in my life?”
I answer, “Would there be a difference?”
“A  big difference.”
“Why?”
“Because I haven’t become all I can be, yet.”
“What do you want to be?”
He thinks for a while then says, “I want to be a good husband,
a good dad, a good son…just a good person.”
“Why aren’t you now?”
Silence again.
He gets it.
They all get it.

It was an intriguing question so, spur-of-the-moment, I hand out another wooden plaque to all the students.
“Let’s make two headstones. One epitaph as it would be now, and one for later, when you have a chance to become who you want to be.”
I let them work for a while and it’s very quiet. They are all really thinking seriously about what their legacy would be.
If you can put it into a sentence, what would be written on yourtombstone? I thought about it for myself. What would I write?
I make a tombstone for MY grave.
As the class finishes working on their assignment, we pick up the materials and begin sharing what they have written for
Now and Then:
“A failure to all, including herself,” then “A loving person who cared deeply”
“A lazy, jerk-off who ruined his chances,” then “A musician who inspired many”
“A nobody who hated himself,” then “A nobody who was okay with himself”
As we continued to share the class understood what I was trying to do.
They all had a choice as to how they could change their lives, and how they want be remembered.
It was a powerful lesson. 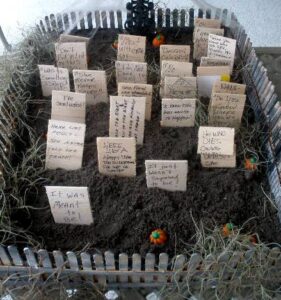 They placed their headstones in the dirt with their last inscription facing out. I told them they could throw away the first headstone, but some wanted to save it to remember how they didn’t want to be remembered. They hugged and thanked me for the insightful class as they left the room.
When all my students had left, and the art room was quiet again, I added my tombstone to the grave yard.

“She flew. She stumbled. She flew again.”