Lanice C. Emanuel spoke at the St. Paul’s Episcopal Church in Fairhope, AL. and I went to hear her presentation.
She was fabulous.
Her story was poignant.
She walked up on the stage and her first words were:

“I grew up in Pritchard, Alabama and I hated all whites”.

What the…
Did she really say that?
Yup.

Lanice continued her stunning presentation by talking specifically to the “blacks” in the audience in an indigenous language that us “whites” couldn’t understand.
Oh, we picked out a word here and there, but mostly no-comprehendy.
… and then she turned to us “privileged whites” and spoke with professional eloquence. (Blacks & Whites were her terms so I feel safe repeating them).
At first I didn’t know what she was doing.
I thought I heard her wrong.
But soon I realized Lanice was talking to “her own”, in their own personal language.
And then turning to “us fortunate whites”… and speaking with poise and eloquence.
I began to understand what she was doing.
It was brilliant.

She was separating her audience into Black and White.
The Blacks started gettin’ in to her swagger when she spoke to them and the energy was contagious.
Lanice was takin’ all of us to CHURCH.

Side bar:
I can’t help but remembering at 14 years old, sitting on a friends front porch, when I was drawn to a beautiful sound I had never heard before.  It was a choir singing in a “Black” neighborhood church. I felt compelled to follow the sound. It was coming from a home with a steeple and the double doors wide open. I knew I was invited.
I walked in the home and immediately felt a Divine Presence like never before. (This was my first introduction to the Holy Spirit). I was the only white person there and I felt at home. I sat in the back pew and breathed it all in. When the music stopped I left without notice.
This experience inspired me for a lifetime. (I wrote more about this in my memoir, ‘Forgetting to Fly’).

As a kid to feel God this way… was a blessing.

Let’s get back to the subject:
At the end of Lanice’s presentation she introduced us to an elderly white man in the audience who believed in her when she was young and gave her an opportunity.
She took it.
And look at her now.
From a young kid who hated whites to the director of the Alabama Justice Initiative.
Bravo, girlfriend. I applaud your efforts. 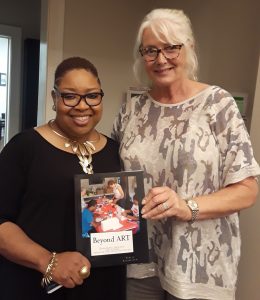 I gave Lanice a copy of ‘Beyond Art’, the book I wrote  from a pilot study on DIVERSITY facilitated in squeaky-white Fairhope, Alabama. I explained to her how I had visited several black churches in the area to gather people-of-color for the FREE art lessons.
I told her that 18 people signed up and only 3 showed for the actual art classes.
When I asked her “why?” she said to me with direct eye contact. “Because you are a privileged, white person. And being tall and pretty doesn’t help. You are not like them. They don’t know you and immediately are suspicious of your intentions.”
Well, that explains a lot. I began to understand.
Lanice continued to say, “Please don’t stop trying though. Once they get to know you better they will come.” 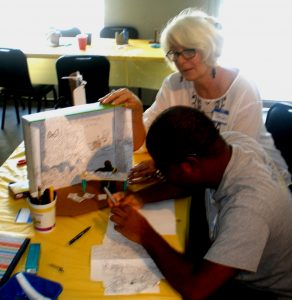 I applaud Lanice Emanuel’s commitment to equality & justice for all, and hope to work with her in the future.

Feeling even more NOW like a privileged white person.