By TamlinApril 21, 2019Uncategorized
No Comments 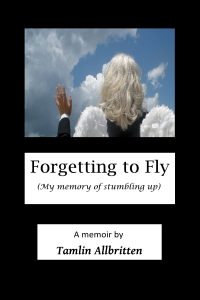 David and I had been married for eight years when he moved to Indianapolis for a stable job opportunity. He was now in the field of Medical Waste and was moving around a lot establishing guidelines for several states which all had different regulations. In those days the government was in the early stages of the removal of this kind of waste (from needles to body parts) and it was not yet standardized. While he moved from state to state I stayed in Clear Lake, Texas living in our beach house where my art school was on the bottom level and our living space was on the top. I didn’t want to follow David around, so we had an arrangement. If he was ever going to be in one place for more than three years, I would join him. Until then, I was happy living my dream and relieved that David had found his niche.

During this time I continued making dolls, but I also worked three hours a day at the ‘School for Discovery’. The school was a friend’s doctoral thesis where kids (K-5), would learn through discovering for themselves. It was her proposition that when a child learns this way a filament is connected in the brain that never releases. (An example of this concept is: instead of making a child memorize 2+2=4, we would put 4 blocks on their desk and encourage the student to move them around until they discovered the same concept on their own.) This was a brilliant hypothesis, and has since been proven true, but not an easy one to teach.
I was hired as the ‘creative input’ in helping the instructors to design ways for their students to learn by realizing on their own. I loved this job but a lot of anxiety came with the open classroom. Every student was learning on their own, at their own speed, and the result of this freedom was chaos. Considerable noise came with this concept of discovering for themselves. Because I am a quiet soul, the clamor would get to me after three hours of involvement. It would help me to prepare my mind for the upcoming pandemonium to sit in my car, in the school parking lot, every day before entering the building…and quietly meditate.
On one particular day, May 12, 1995, I was meditating as usual. My eyes were closed, breathing deeply, centering myself, when I saw a small dot of bright white light. It startled me but I kept my eyes closed and focused on the light that was now getting bigger and bigger. I was attracted to the light and began to feel the sensation of moving upward. Soon I realized that the light wasn’t getting bigger, I was moving up a tunnel toward this light. I instantly knew this was a gift. It was what so many others had experienced when they died. I was not afraid and instinctively knew I was being blessed in some way. I watched the light get bigger the closer I moved toward it and felt my body lift, higher and higher.
Just when I reached the edge of the tunnel, I stopped moving upward. The light had turned to a brilliant blue. A color I had seen before and it felt like home. I wanted so badly to keep going up, out of the tunnel, and be immersed in the color, but I couldn’t. I was stopped at the edge. Just then, I heard the words “Write this down.” I began to smile because my world is consumed with numerous lists on post-it-notes all over my kitchen, and office, and notebooks, of things to do and things not to forget. As I continued to think about the irony of this statement, the words came quickly and started overflowing my mind. Many words all jumble together. They didn’t make sense but I didn’t care. I knew they were from God and I knew that somehow this experience would eventually make sense. I was so excited this was happening to me and I wanted to savor the experience. Eventually the message stopped and my body started back down the tunnel. I felt the light going away and getting smaller.
When I opened my eyes and I was still sitting in my van in the parking lot. I looked at my watch and I had been “up” for eight minutes. I didn’t have time to think about what just happened because I was late for school. I opened the car door and as I stepped out, my legs gave way under my weight and I ended up on the hot, black pavement. The principal, my friend, rushed out to see if I was OK. She had seen me fall and was concerned for my health. I felt exhausted and yet somehow exuberant at the same time. I knew that I could not teach today and so did my friend. She said “Go home. Take care of yourself.” I welcomed the idea.  When I got home I couldn’t help but think of what had just happened to me. Words kept coming to my mind, important ideas I knew I had to ‘write them down’. First, though, I wanted to draw what I saw. I grabbed the closest medium which were markers and I quickly drew the tunnel and the bright sky on the back of my business card.
Now, if I could keep the card safe, I would never forget this experience. 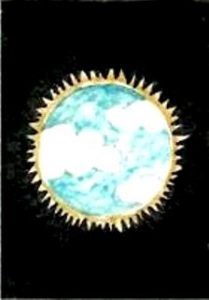 As instructed, when I got home, I immediately found a pen and paper and started writing.  At first nothing made sense, but I kept writing words, short sentences, ideas, never stopping to understand what I was remembering. I knew it would all come together later. I wrote for twenty-four hours straight. Not sleeping, showering or barely eating. I was focusing on what I had been told and just kept ‘writing it down’. After hours and hours, ideas, concepts started to emerge from the writings.

I tore apart the paper into segments that seemed to be similar in drift. I put them into piles and labeled the categories. Eventually I saw what was emerging. I was in awe at the precise guidelines that were evolving. It brought to my knees with the realization. The words, the ideas, the assignment…

That’s how I started my ART Camp. We (me & God) created extraordinarily creative lessons that would teach kids concepts that they were not learning in school. I made fliers that I put up in the halls of my school, and bingo… I was in business. The next weekend I started the classes. My new students worked with paint, chalk, clay, collage, sculpture, all different mediums. Parents were invited to stay and watch as their children explored and discovered their real sense of worth. This was two-fold because the moms and dads were learning the same concepts by simply watching their kid experience art.
We would always start with a group discussion of the theme covered. (Angels among us, Nature vs. man-made,  America the beautiful, etc.) This way the students, from seven to seventeen, could share what they knew about the topic, and the conversations were always illuminating.
My parents helped with the art school as well. My mom would take their $20. and sign the kids up for next weekend’s classes. She would set out the snacks and refreshments while I prepared the stations. Every class had a theme that had three or four different projects and each student would go from one to another as they completed each art lesson. I took advantage of the beach house (and later the Arizona mountain) settings and had stations inside and out. The older students would help the younger ones and the coherence created a natural flow and set the stage for learning. 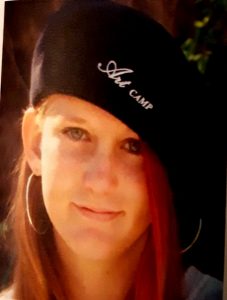 On Clear Lake my dad always worked the ‘dock station’ watching carefully so no student would fall into the water. I remember his favorite class was when he showed them a rainbow trout (he fished for it before the students arrived) and had the kids try to mix paint to match the shiny colors that were on the fish scales. The eager artists learned to mix each color but couldn’t match the vivid hue’s they found on the fish. (The lesson was: Nature’s color was more brilliant than we can ever imitate) Then, with the paint left over the kids would print the fish on to canvas bags.  How proud were they to show their bags and explain how man tries to imitate nature, but never really can. They loved this class and my dad loved teaching them. 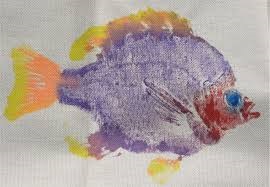 The angel class always started with the discussion of their angel experiences. Once a young boy, maybe six or seven, told us how and angel came to visit him and the exact conversation they had, word for word. His father was standing back outside the circle, watching, listening, and seemed baffled. When the discussion was over he said to his son “Why didn’t you ever tell me of that angel experience?”
The boy looked up to his dad and said “because you wouldn’t have believed me.”
Out of the mouth of babes.
How sad is it when our children start out with a sacred knowing, and somehow through their hurried course of life, they forget.
The classes that day were moss angels, clay angels, tissue paper angels, and shaving foam angels. 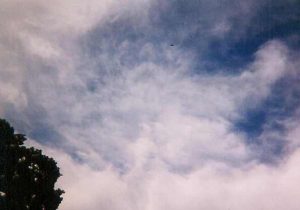 The class ended, and conveniently, a wonderful cloud angel passed over the beach house to celebrate the day.
All the students noticed.

So what does this have to do with the business card drawing of my vision ???

I found the card this week in an old book that didn’t die in my fire. 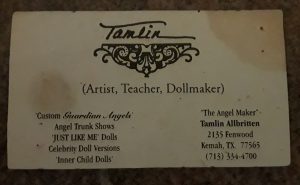 A bit stained and faded, but… 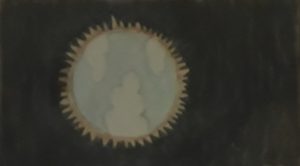 A perfect reminder… and on Easter Week.